Introduction to the Rules

Note: some rules have exceptions that are not explained here.

No competitive game functions properly without rules and ice hockey is no exception to that. There are several rules that define how you should or should not play the game. The rules range from the size of the rink, the locations where the puck is dropped to penalties that should be given to misbehaving players. On this page, we treat a subset of the rules that we consider to be the most important in order to understand a game of hockey.

Rink
The Game
Offside
Icing
Puck out of Play

First, we start with some basic rules, which are needed to understand the game.

Ice hockey is played on a rink with ice (hence the name ice hockey). The layout of the rink is shown in the image on the right side of this page. On the far ends of the rink are the goal lines in red. In the middle of each goal line is a goal located. Each of the two teams has to defend its goal and try to score the puck in the goal of the opponent.

There are two blue lines located at a third and two third of the rink. These blue lines split the rink in three zones. For each team, the zone where their goal is positioned is called the defensive zone. The zone of their opponent is called the offensive zone. The zone in the middle, between the two blue lines, is called the neutral zone. The center of the ice is marked by a red line, which is dotted in the image on the right side, but in practise this line is solid. The exact center of the ice is marked by a dot with a big circle around it. Furthermore, there are four other circles and eight red dots. These eight dots, and the center-ice dot, are called face-off spots and mark positions in the rink where the game can be started, or continued if it was stopped.

Each game starts with a face-off at center ice. At every moment in time, each team is allowed to place six players on the ice. Typically, one of these players is the goaltender. The five other players are typically two defensemen and three forwards. The defensemen are called the "left defender" and "right defender", while the forwards consist of a "center" and a "left winger" and "right winger". During the game, players are changed on a regular basis. A player may be on the ice for only 30 seconds up to a minute and a half before he gets changed by a player from the bench. For this reason, a team consists of 22 players at maximum. Changing often makes ice hockey an attractive game to watch. As players who get tired change, fresh players get on the ice to replace them. This ensures a fast game where there is no time to look around as a spectator: the play can go to the other end of the rink within seconds.

The movements of the puck are limited by three rules: offside, icing and puck out of play, which are explained below. At each moment, the referee can stop the play if an infraction of the rules occurred. The play will be continued at one of the face-off locations.

In ice hockey, there is a simple offside rule that needs to be taken into account if you play games. The offside rule states that for a play to be legal, the puck has to entire the offensive zone before any attacking player. This means that if one attacker, say the left winger, enters the offensive zone, and you pass the puck to him, the referee (linesman) will stop the play and a face-off will be conducted in one of the face-off spots in the neutral zone, closest to the location where the infraction occurred. 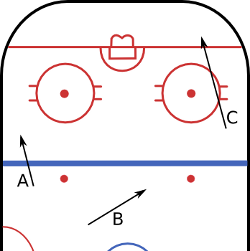 This rule is easy to remember: The puck must enter the offensive zone first!

A second rule that limits the movement of the puck is the icing rule. This means that if you play the puck before the red center line (the red line in the middle of the ice) and the puck ends up after the opponents goal line, without being touched, the play will be blown dead and the face-off will occur on your own defensive zone.

In the image below, the green circles are the players. Pass A (from just outside the offensive zone) is a valid pass, provided that nobody is offside. Pass B is icing, as the puck is played from before the middle line and ends up after the goal line. 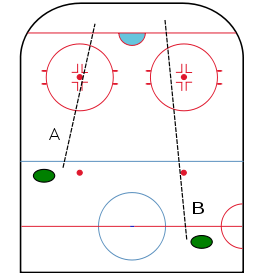 Puck out of play

The third limitation to the movement of the puck is when the puck goes out of play. This happens more often that you would think. The puck can enter the player bench, enter the netting that is above the glass or get on the net at the backside of the goal. In all these cases, the referee will blow his whistle and the play will continue after a face-off.