Seven years ago, the Studs website was completely redesigned. Today, we introduce another complete overhaul of the website. Gone are the dark days with a black-background website. The Studs website is once again an example of modern webdesign, adapting itself to the device you use. For comments or bug-reports, please contact the webmaster.

At the same time, this is a good moment to reflect on the history of the Studs on the internet. 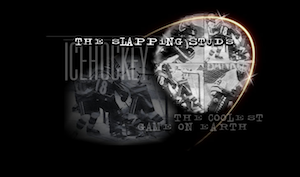 In the beginning of 1999, the first Studs website was released. It was hosted on a computer on the University campus. However, it did have extensive information about the team, it's players and the league.

The promotional text at the website is definitely one to quote (in Dutch): 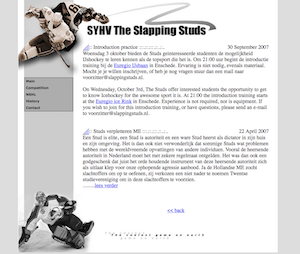 In September 2001, a new website was released. A fancy design and added information, as well as a public message board, made sure that our team was digitally well represented within the student hockey league.

In 2005, the website was migrated from a subdirectory of one of the university's servers, to it's own domain on slappingstuds.nl. At the same time, our mailinglists were converted from Yahoo Groups to our own website. 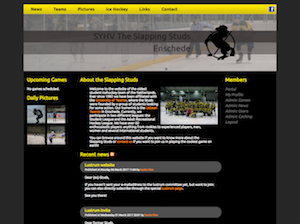 Whereas the 2001-version of the website continued to work properly, with some changes to keep the code up to date, we did run into some problems over time. Extending the website with new features became difficult and time consuming. This led to the decision to design a brand new website and build all code from scratch. This sparkled the creativity of Tanja Beernink to create a design, and yours truly (Elmer) to write the backend code.

This led to the introduction of a new website in October 2010 and the design properly implemented in December 2010. For the years to come after that, the website served it's purpose of informing members, potential members and our fans about our team.

The first steps towards a new design were set in 2013, when Carolien Boersma started thinking about ways to improve the design. In the years to follow, Carolien designed a new website, which was implemented finally around the summer of 2017. After lots of changes to the backend of the website (allowing board members to change the website, as well as members to sign up to events and games), the release date is today. I hope you enjoy the website as much as I did designing and making it.